Paraglider line materials, and why they matter to you

One of the many things which the paraglider designer must make informed choices about during the design process is that of lines. Which lines will he use where in the design, will he employ Aramide/Kevlar lines or Dyneema, and will he go sheathed or unsheated, or a mixture of all these options? 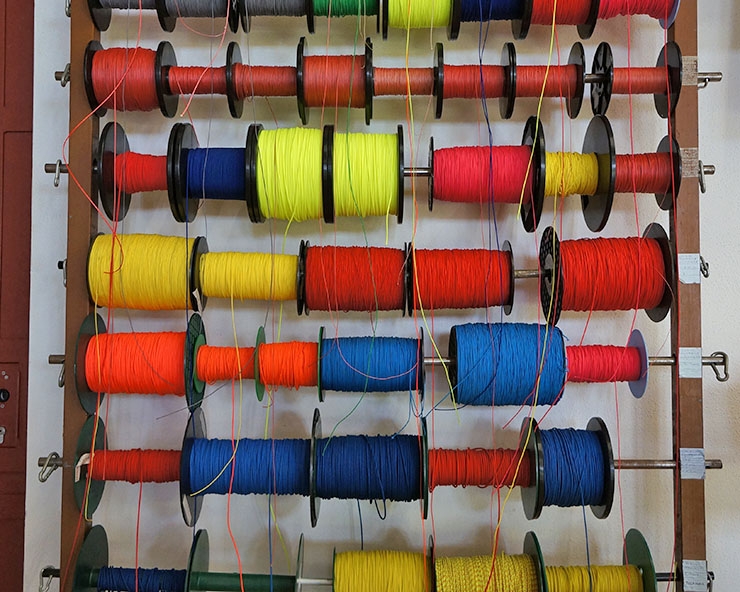 There are several reasons why his choices matter a great deal:

• Different line materials have different breaking loads, even for the same diameter,

• Some materials age faster than others, but may have other advantages which make them desirable after all,

• Sheathed lines generally last longer, due to the thin sheath woven around the core of the line – but they are also thicker for the same breaking loads, since a part of their diameter consists of the sheath, which only adds thickness but no strength,

• Line drag is a great part of the total parasitic drag of the glider, and reducing the number of lines used, and their diameter, is a surefire way of increasing performance.

In this article we'll try to look into some of the benefits and drawbacks of the different available line materials and production methods, but first we'll list the options and briefly describe them, so you know what we're talking about.

From the outside all sheathed lines look the same, since we only see the sheath and not the core of the line. But when a sheathed Dyneema line is cut, or breaks, we see that the core is white and non-woven (sheathed lines are extruded, then the sheath is woven over the extruded core). 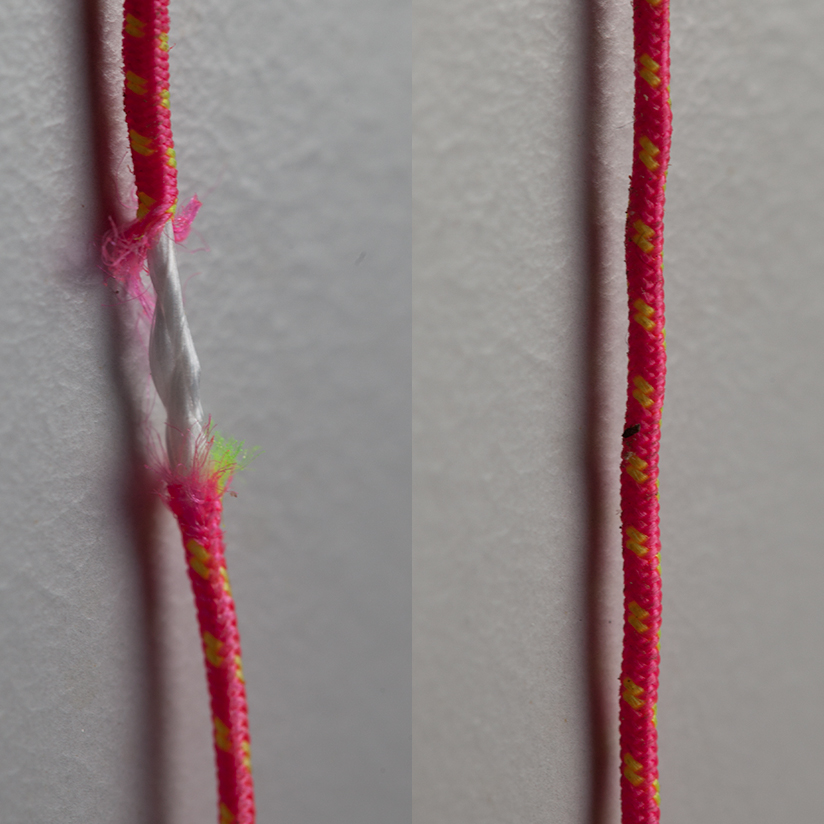 The image on the right shows two damaged lines, both of the sheathed Dyneema variety - note the white core. The line on the right is slightly tricky; it FEELS lumpy to the touch, and has been damaged by excessive stretching, but a quick visual inspection may not notice the damage, however both lines must be exchanged before the next flight.

Looks just like above when the core isn't exposed. Once we see the core we realise that it is light-brown in colour and consists of non-woven Aramide fibres. The colour gives them away; light-brown. You can generally see the exposed core at the end of a line, where it is sewn to make a loop. If the core looks "dirty" then you're most likely dealing with Aramide.

Is white until someone colours them. It is however unusual to see completely white unsheathed lines on a paraglider, except on older Axis or MAC Para competition wings. Dyneema is readily coloured, and most manufacturers use line that is coloured from the line supplier, frequently in red. The line is woven and has a smooth, slippery look and feel.

These lines aren't easily coloured, so they are mostly employed in their natural, light-brown look. Woven, and with a much less smooth look and feel to them, these lines quickly look quite old and frayed when subjected to the rigours of less-than-perfect launch areas. In the image below, the left line is unsheathed Aramide/Technora, the centre one is sheathed (either Aramide or Dyneema) and the right one is unsheathed Dyneema. 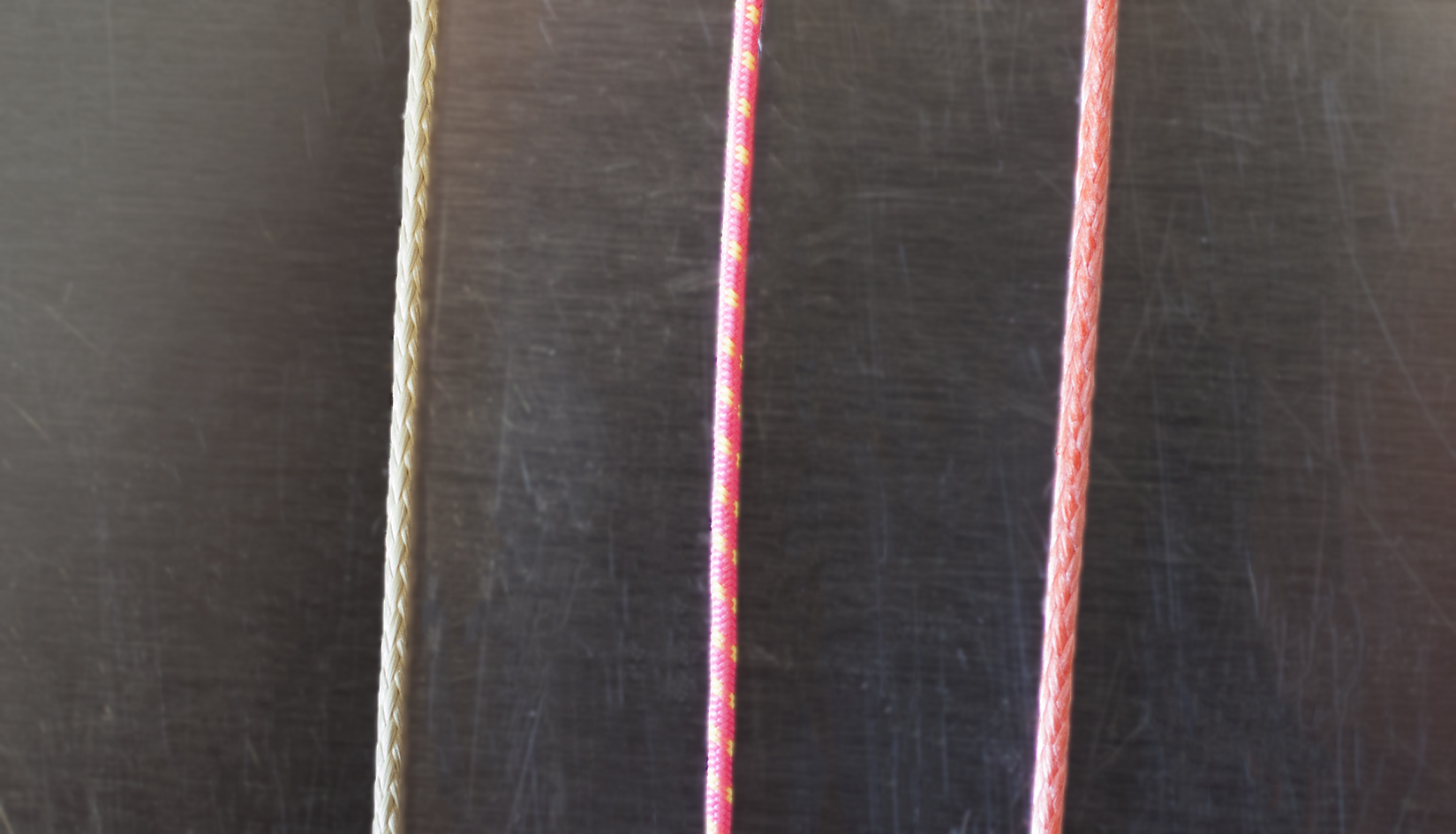 Properties of the different materials

If we focus strictly on technical specifications, as supplied by the line manufacturers, then unsheathed Dyneema lines are the superior material from just about every angle you look at them; they are stronger than their counterparts made from sheathed or unsheathed Aramide/Kevlar for the same diameter, and they are stronger than sheathed Dyneema lines for the same diameter too, due to #3 in the bullet list above. They are even comparatively insusceptible to degradation from exposure to UV radiation (sunlight), they are not easily damaged, and they weather the standard "5000-cycle" bending test, where a line is mounted in a test bench and then subjected to five thousand 180º bends, very well. They are even dimensionally stable length-wise when you put great loads on them, meaning they don't stretch (much) under load.

On the opposite side of the spectre we have unsheathed Aramide/Kevlar lines. As mentioned above they aren't as strong, but to make matters worse they tend to degrade comparatively fast when subjected to UV radiation, they fray more easily from physical abrasion, and they lose worrying amounts of strength when they are put through the "5000-cycle" bending test. Aramide/Kevlar lines will stretch a little more than Dyneema under loads, and may retain their new length even when unloaded again.

Somewhere in between these are the sheathed lines made from either Dyneema or Aramide/Kevlar. Their main advantage is that they are less susceptible to damage from both physical abrasion and UV radiation, but they will always be thicker for the same breaking load (bad for performance). Some pilots find that they tend to tangle and knot less, something that is a good argument for utilising them on gliders in the beginner-and-intermediate bracket.

From what we have learned so far, choosing the right lines seems straight-forward – go with unsheathed Dyneema for most uses, and perhaps some sheathed Dyneema on the school wings, and Bob's your uncle. Unfortunately things aren't quite as simple as that.

The first thing we need to realise is, although Dyneema is dimensionally stable under loads, it does tend to shrink under certain circumstances, for instance when it is subjected to temperatures higher than app. 70 degrees Celsius. Initially all lines will tend to shrink equally – but as soon as a glider with shrunken lines is taken out for its next flight, the A and B lines, which carry much more weight than the C lines, will return to their original length, while the C-lines will remain too short and bring the glider out of certified trim. Temperatures in this range may sound unlikely, but the fact is that if you leave your glider in the boot of your car during hot, sunny days, or if you lay your glider out on the hot sands of Iquique or Sossusvlei, then the temperature will soon be quite a bit higher than 70 degrees. The thing to remember then, not just for the Dyneema lines but for the canopy cloth as well, is that you really shouldn't leave the glider in the boot of the car, and you should try to limit the exposure to the hot desert sands of tropical regions.

To make matters more interesting, the only way we can know for sure if the wing is out of trim is to measure it, and preferably with a professional setup (laser measurer, 5kgs loading on each line etc.) - we can suspect that something is wrong, for instance if the wing doesn't inflate nicely any more, or if it is climbing less efficiently than it used to, but to really KNOW we need to send the glider in for a check.

Aramide/Kevlar lines, and their relative disadvantages compared to Dyneema, have already been outlined – but contrary to Dyneema, it is very easy to see on an unsheathed Aramide/Kevlar line when it is worn, and although they do stretch, and they aren't as strong, at least they don't shrink.

This all means that when the designer is making his choices regarding the lines he will use, he needs to take some things into account, like:

• Which pilot segment is it for? A glider which is designed to be flown by very advanced pilots can justifiably be equipped with lines which require a little more attention, provided they offer significant performance benefits (Dyneema...)

• Is performance at all cost more important than longevity? I.e. will the intended pilot profile ever consider sending the wing in for a check, or will they expect it to remain airworthy without any further attention for the entire lifespan of the canopy? The latter scenario speaks for sheathed Aramide/Kevlar line, which doesn't shrink and is insusceptible to UV damage due to the sheathing, but in actual fact even these lines should be checked every now and again, not least due to their inherent problems with the "5000-cycle" bending test, and anything similar in real life...

One way to have your cake and eat it is to employ sheathed Aramide/Kevlar for the thicker, lower lines, and Dyneema for everything above the first bifurcation. This is due to the fact that the total length of the shorter gallery lines isn't affected as much by, say, 0.5 percent shrinking as the longer, lower lines, and also because the thick main lines are pretty heavily over-dimensioned on many wings anyway. But this solution assumes that you're looking for a compromise anyway, however with performance wings we generally aim for the least possible parasitic drag, and then we're back with the unsheathed Dyneema again...

It would be enticing to think that we could circumvent the paradox by using slightly beefier Dyneema lines for the main lines, and normal, thin Dyneema for the gallery – after all, this would mean that we had the best of both worlds in terms of most of our parameters, right? Wrong. The issue with Dyneema is not strength, it is shrinkage, and that happens irrespective of line diameter.

The conclusion is that as long as we're so hell-bent on performance increases with each new model incarnation we will have to learn to live with the few drawbacks that accompany our use of Dyneema line material – other line materials do have their place for certain applications, especially among the lower-rated gliders, but on the performance models there simply isn't, at the time of writing, any sensible alternative to Dyneema. Meaning that IF you're a performance pilot flying a performance design then you may as well get used to the fact that you will want to have your lines checked every now and again (according to the Owner's Manual), and you will want to be alert to subtle changes in your wing's launching and flying characteristics. The benefits you get for your extra vigilance is higher performance AND higher passive safety, because Dyneema is also stronger, and remains MUCH stronger, than any other line material currently used in paraglider production.