Many hang gliding and paragliding greats such as world record pilots Jim Lee and Larry Tudor, looping star John Heiney and Paragliding World Cup Champions Richard Gallon, Olli Rössel, Alex Hofer and Uli Wiesmeier have been associated with UP Europe at some time during their careers. UP's full story fills a book and reads like an encyclopedia of flying. Here's an overview: 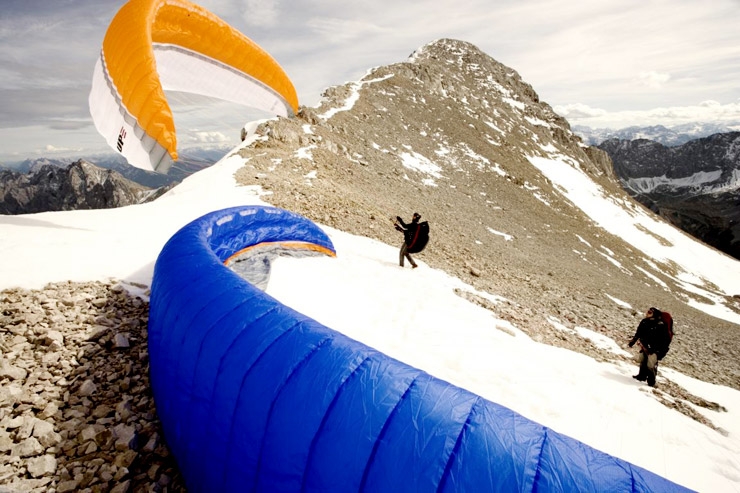 Pasadena California, 1970. Pete Brock finishes his studies at the Art Center, a world-renowned school of industrial design, as its youngest graduate ever. His racecar designs, like the GM Daytona Coupé- a kind of U.S. Ferrari on the basis of the Cobra 427, quickly become legendary. Brock soon discovers a new passion: hang gliding- probably the most radical sport imaginable in the early 70s. While there are several glider models on the market there is only one common theme- they are all extremely dangerous. This also holds true for Pete's first design, the Brock Redtail.

However, when Pete Brock gets together with the young designer Roy Haggard, a new concept is born. The Dragonfly is the first tenable post-Rogallo glider and becomes the flagship of their newly founded company, Ultralight Products. A series of successful designs follow, including the Condor with its world record duration flight of 16 hours, 4 minutes in 1979.

Helping the company gain success quickly is Pete Brock's logo design. The UP arrow achieves cult status from the beginning and for many pilots characterises like no other logo the spirit of hang gliding and later paragliding. The logo and the brand's positive image attract the interest of various investors over the company's three-decade history. The first is in 1980, when Yuseke Yamazaki, a Japanese investor from a dynasty of Samurais, lays the foundation for UP's success in Asia.

The year 1980 also marks the introduction of Roy Haggard's latest pioneering development, the UP Comet. The Comet's outrigger-free construction concept is revolutionary and is still valid today. Jim Lee sets the world distance record at 268 km with a Comet in 1981, and eventually the UP Comet becomes one of the biggest-selling hang gliders of all time. Success breeds followers, and the Comet is a natural target for copying. In 1982 Airwave, UP's representative in Europe, produces the Magic, which is nothing more than a modified Comet.

In the mid-80s Pete Brock and Roy Haggard retire from the everyday business. Ownership and location of the firm change in the following years. Through the continued influence of Yuseke Yamazaki, UP becomes UP International, a wholly owned subsidiary of a Japanese parent company, Isomura, Inc. Encouraged by the success of the hang gliding business, Isomura diversifies the UP brand into windsurfing, UL-flying and fashion. In Japan one can find the UP arrow on the UP-Sports clothing line, and on T-shirts, jackets and socks. Even today at famous Venice Beach in Los Angeles one can find rollerbladers leaning against the UP arrow logo as they take breaks on park benches donated by the local UP surf shop in the mid-80s.

If UP's logo is the stuff of legend, so are its corporate locations like the UP Soaring Center in Salt Lake City. The TRX, the first production series hang glider with carbon tube elements, is developed at the Soaring Center under the guidance of UP's new designer, Terry Reynolds. Despite various technical innovations, the TRX remains the last successful UP hang glider for some time.

Paragliding is now the new trend. Though UP is a latecomer to paragliding, the company hits the mark in 1990 with the relatively unknown Korean designer Gin Seok Song. The Flash, developed by Gin in the U.S. together with test pilot Greg Smith, is revolutionary. The Flash is the first paraglider with a perfectly smooth leading edge and has more performance than anything else on the market. The glider dominates in competition and becomes a bestseller. Yet the Flash remains Gin's only design for UP since he is coaxed to another paragliding newcomer, Edel, with a lucrative offer.

At this time, Claus Bichlmeier is UP's importer for the German-speaking markets.

By now the burgeoning paragliding market is demanding of UP a more formal and resolute business organization and market approach. In 1992 Ernst Schneider establishes UP Europe in Sindelsdorf near Garmisch and all development and testing is carried out in Europe. Ernst's list of colleagues reads like a 'Who's Who' of paragliding. Designer Rasso von Schlichtegroll, later co-founder of freeX, develops best-selling gliders like the Katana, the Vision and the tandem Pickup. Chief Test Pilot Ernst Strobl crowns his competition career in 1992 by winning the European Championship.

That same year Uli Wiesmeier wins the first Paragliding World Cup series on a Katana. In addition to his involvement in competition, Uli is responsible for UP's public image. Uli's brilliant advertising work, his eye for style in developing the Skywear line of clothing and his award-winning creativity in filmmaking all contribute greatly to ensuring that the UP legend thrives in paragliding. French UP pilot Richard Gallon wins the 1994 PWC. In 1995 the new World Champion Stephan Stiegler and top pilots like Peter Hensold, the Italian cross-country ace Eduard Taschler and Sebastian "Rambo" Bourquin become members of the UP team.

Motivated by UP's success in paragliding, Ernst Schneider establishes a hang gliding department under the auspices of UP Europe. The original Salt Lake development team at the Soaring Center starts a separate company that eventually leads to the formation of Altair under the leadership of Dick Chainey and John Heiney. Bernd Weber, the manager of Thalhofer and co-founder of the rigid wing manufacturer A.I.R. takes charge of UP's new hang gliding line. The Speed, UP's first hang glider in nearly five years, is introduced in 1995, and the topless version, the Speed TL follows in 1997.

Ernst Schneider sells UP Europe the same year, and the buyer is once again from Japan. The profitable entertainment group Daiichi Kosho is seeking to diversify from the Karaoke industry and is looking to the flying industry for an additional profit center. With the continually developed paragliders from Europe and their own paragliding schools domestically, "DK" quickly enjoys market leadership in Japan.

The Japanese invest substantially in UP Europe, where the workforce and the competition team are expanded. In 1997 half of the German League is flying UP's new performance glider, the Escape. During this time, UP Europe relocates to offices north of Garmisch in Kochel am See, where up to 20 employees are working.

By this time, the paragliding boom is subsiding and high quality designs like those of the Escape, the Soul, and the Blues do not attain the market successes of their predecessors.

Many hang gliding and paragliding greats such as world record pilots Jim Lee and Larry Tudor, looping star John Heiney and World Cup Champion Uli Wiesmeier have been associated with UP Europe at some time during their careers. UP’s full story fills a book and reads like an encyclopedia of flying. Here’s the whole story: Download

The next chapter in the UP story begins when Daiichi Kosho and UP part ways in 1999. At the same time, Bernd Weber gives up the hang gliding part of the business. Of the several parties interested in the remaining paragliding business with the exceptional UP brand, the successful bidder is the Swede Christian Rönning. Flying since 1988, Christian is one of the pioneering paraglider pilots in Sweden. He also brings with him a wealth of business experience gained as a management consultant to multinational firms in Asia.

At the end of 1999 Christian Rönning began UP anew with a substantially reduced, yet highly experienced staff at his side. Torsten Siegel, Georg Maier and former World Champion Stephan Stiegler were responsible for product development, and it was upon their know-how that the first UP Europe product line was based. A new era for UP was firmly established when in just one year UP progressed from the old designs to a whole new glider range including the Pulse, the Makalu, the Summit, the Gambit, the Sherpa, and the Gambit C. UP's R&D department has since adopted a roughly three-year cycle for the renewal of gliders, which led to a number of even more succesful designs being launched, not least the World Champion 2003 winner called the Targa, the Serial Class reference wing for almost 4 years called the Trango, and later the successor to these, the Targa 2 which won the World Cup in 2004. Torsten Siegel eventually decided to pursue his career goals with Swing, and some time later Stephan Stieglair departed to form his own new brand called Air Design, testimony to the fact that anyone who is anything in free flight has worked with UP at some stage.

Since 2010 the new design team, which picks up the baton from the Stieglair/Siegel years, is headed by Czech industry old-timer Frantisek "Franta" Pavlousek and supported by both new faces and experienced people. In the former category not least German aerospace engineer Matthias Hartmann, who is a passionate hobby paraglider pilot, and Czech young gun test pilots Michal "Snajby" Sneiberg and Jirik "Jirka" Dlask, and in the latter category German lightweight guru Stefan "Boxi" Bocks.